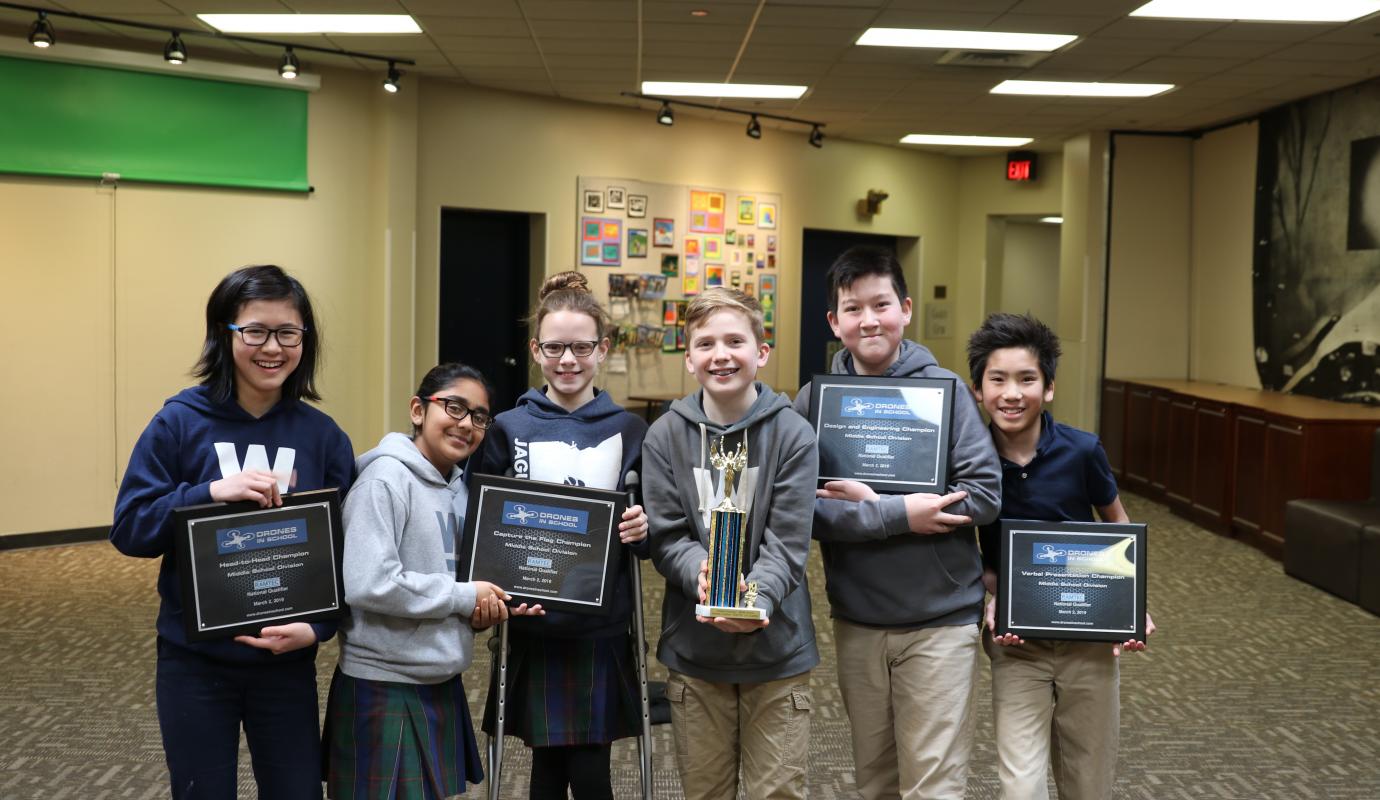 The Wellington Drone Racing team, Jag G-Force, displayed maximum velocity at the RAMTEC competition this spring. At the event in Marion, eight middle schools and high schools took the plunge working without video footage of previous competitions while also interpreting rules, purchasing equipment, designing and flying competition drones for the first time. All of the teams went up against each other in two flying competitions: capture the flag (a first time experience for the Wellington team using the competition course) and head-to-head racing. Wellington’s six member team worked very hard preparing for this competition.

“We started with literally nothing,” Sabrina Bong ‘25 recalled. “It wasn’t like botball, or mini sumo, where there are veterans to help the ‘new recruits,’ so we had to form a team and project completely from scratch.”

Once the team, including members Bong, Henry Allen ‘24, Katherine Armitage ‘25, Pierre Cruz ‘25, Charlie Lowrey ‘25, and Nima Raychaudhuri ‘25, came together, their energy and enthusiasm was unstoppable. Their drive and dedication was integral to the team’s success because there were so many components to the project, according to Bong. “We had to have a team identity, logo, project management system, work out the design for the drone, researching, and documenting it all in a required portfolio and verbal presentation.”

The team was also responsible for marketing themselves, so they designed a station at Lower School Science Night and presented at All Things Wellington in January. A scrimmage at the OETC conference downtown in February gave them a taste of what was to come and proved extremely beneficial in helping the team realize exactly what they needed to work on. “We came back from that event and had to change so many things based on ideas we got from other teams,” Bong said. “Our design engineering team got new ideas for how to design the frame, and we realized that we needed to build practice obstacle courses for our pilot, Pierre, otherwise he’d have no experience with all the loops they have you fly through.”

One of the most challenging parts in working together as a team was building trust. Each member was in charge of one component that the others all relied on.They needed to be able to count on each other to produce quality work under deadline. While the process could be stressful at times, the camaraderie among the students helped them through. “Working with everyone was one of the best parts,” Bong said, “because I could just relax and laugh, while being productive at the same time.”

During the RAMTEC competition, teams were judged on: portfolio & booth, design & engineering, verbal presentation, head-to-head, and capture the flag. In the middle school division, the Jags were national qualifiers in 4 of the 5 categories and won the Overall Champion trophy for Middle School Drones in School RAMTEC U.S. Qualifier.

“The team worked very hard to get to this completion,” Coach Helen McConaghy said. “I am proud of all their efforts and learning. I look forward to the expansion of this Central Ohio competition with Wellington students helping lead the way next year.”