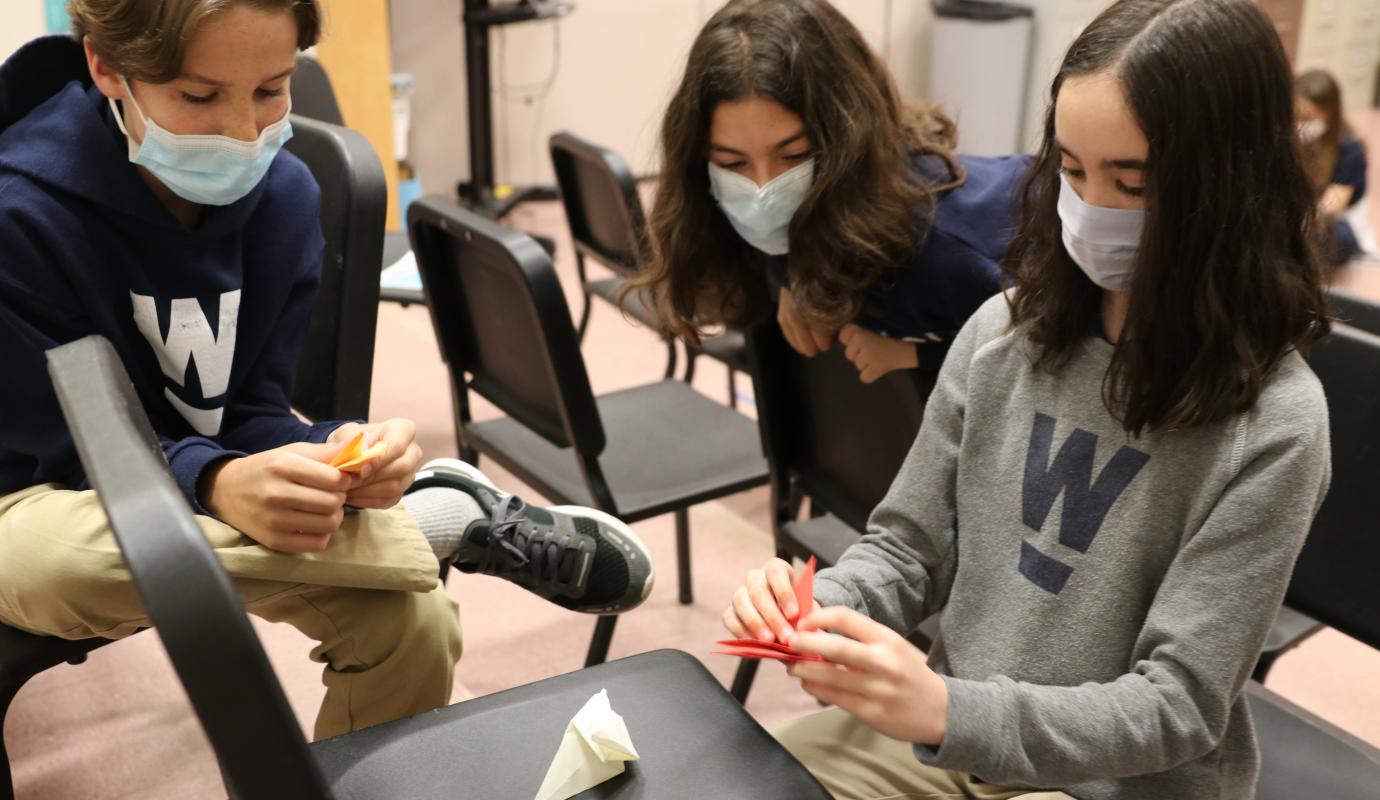 Connections strengthen community and also bring the greater world into focus. With that comes a clarity of purpose that drives positive change. Whether through small acts of kindness, joining a global movement for change, or designing creative solutions for everyday challenges, Wellington students are given opportunities to explore what it means to make an impact.

In choir, 5th and 6th graders recently began learning “A Song of Peace” by Teresa Jennings, based on the ancient Japanese legend that promises anyone who folds a thousand origami cranes will be granted a wish by the gods. Middle School Vocal Music Director Lisa Springer thought the students’ experience could be enhanced by making their own paper cranes to be used as a backdrop for their upcoming spring performance. In researching the project, Springer discovered the cranes can be sent to the Children’s Peace Monument in Peace Memorial Park, in Hiroshima, built to commemorate Sadako Sasaki and the thousands of other innocent children who died due to the atomic bombing of the city on August 6, 1945. Exposed to radiation by the blast at a young age, Sadako died ten years later from leukemia. During her long illness, she folded paper cranes. To this day, folded paper cranes from around the world are sent to the monument, symbolizing our continual quest for peace.

With plans to invite all middle and upper school students to join in, Wellington is well on its way to meeting the 1,000 paper crane goal and also Springer’s goal as a teacher, by creating a truly memorable project for her students.

Creating lasting lessons in thinking of others is central to so much of the Wellington experience. In their Little Jags class, teachers Rebecca Shrader and Lori Feyko have been talking about kindness. What does it look like and feel like? Beginning on a personal level, then moving outward to their peers and eventually their families and school community, students discussed how to be kind and also the many ways they can express gratitude for the kindness of others.Just before spring break, the class expanded their thinking outward to the great Columbus community and decided to do a “top 10 most needed” necessities drive for Nationwide Children’s Hospital. Students learned about how it’s a special hospital just for kids and, during their stay, they might need toys, DVDs, or perhaps art supplies for some fun. With the help of Little Jags’ family donations, Shrader, Feyko, and Learning Guide Jessica Hawkins were able to drop off three large shopping bags full of goodies at the hospital over break. “I’m so proud of our young learners’ generosity,” Shrader said, “and their ability to understand such a big idea!”

Big ideas can also shape the world when they tackle real world challenges. For their final project in Intro to Engineering, upper schoolers used their advanced problem solving skills to do just that. Students were asked to design and manufacture a scale that would turn on an LED when a predetermined amount of weight was placed on it, then automatically turn off the LED after a predetermined time.

Beyond those basic requirements, students were free to implement any design they chose, according to teacher Christian Fischer P ’24 ’26. The project required them to use a combination of the electronics, mechanics, and computer aided design skills they had learned in class. “Their creativity showed in the wide variety of solutions they developed,” Fischer said.

The project was typical of many professional engineering problems in which there is a goal with limited constraints, but rarely found in traditional classrooms. The skills and connections these students will now take into the world provide yet another conduit for change we can all be proud of.