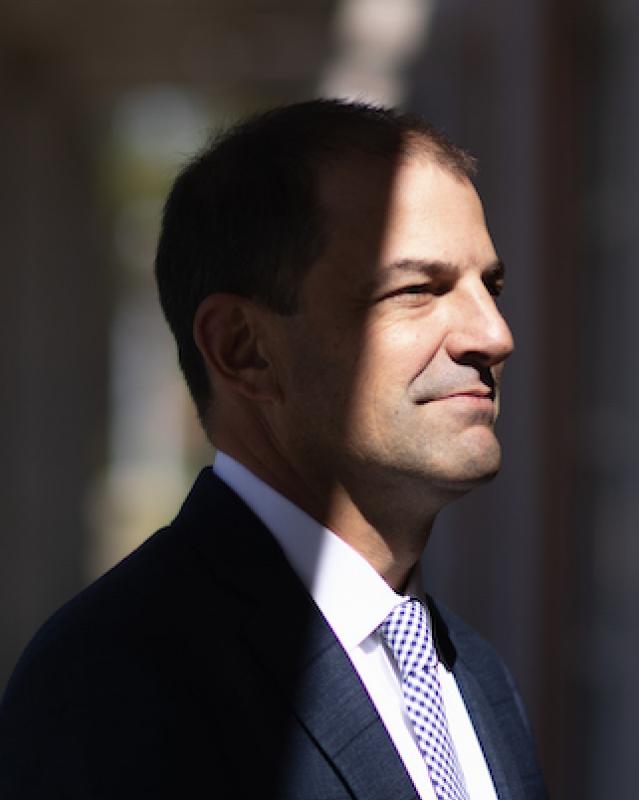 Wellington’s new head of school, Dr. Jeff Terwin, will transform teaching and learning, one voice at a time.

Music is a big deal to Head of School Dr. Jeff Terwin. A soundtrack follows him throughout the day, whether playing in his office at Wellington or at home as he does the dishes. Meticulously- curated over a lifetime, his playlist is eclectic, expressive, and always relevant. Sometimes upbeat and humorous, other times impassioned and stirring, the songs that resonate the most with him tell authentic stories about what it is to be human. Music is important to him because of its stirring power to bring people together. And if his devout appreciation of music underscores a remarkable talent for listening, Terwin will tell you the most valuable voices at a school are those of the students. We just have to listen.

At his induction ceremony in August, the music he personally selected for the occasion was fun but also inspirational. It set a clear tone for not just a new school year ahead but a new era at Wellington. Terwin addressed students with heartfelt gratitude for the energy and optimism they bring to school each day. To him, it truly is a gift to be a member of the Wellington community. A gift not be taken lightly, though, as Terwin also outlined the very important work they had ahead of them. “Students,” he said, “the world needs big, bold, and positive leadership. Now, more than ever.”

As he begins his first year as head of school, deeply committed to further strengthening an open, inclusive community with children at the center, Terwin will model for them exactly what those words mean.

From his first job, at the age of 12, helping his grandfather refinish the floors of school gymnasiums to now leading an education revolution focused on student autonomy, Terwin has dedicated his life’s work to creating dynamic, transformative learning experiences for all ages. His talent for collaboration and partnership was apparent at an early age. In 6th grade, he was the president of student council and sat in on meetings with school leaders to build a new playground. It landed him a picture in the local paper and a lifelong appreciation for the efficacy of student voice.

Few of us in our youth have such a clarity of purpose, but college was a time of contemplation and self- reflection for Terwin. A born researcher with a naturally inquisitive mind, he methodically interviewed professors in the field of science before pursuing a strong interest for animals and aquatics. When offered the chance to live on remote Appledore Island off the coast of Maine with a small group of researchers, he dove right into his very own Walden moment without hesitation. Thoreau’s meditation on self-reliance and individualism, along with Melville’s epic, seafaring odyssey “Moby Dick,” were revelatory for the marine biologist pursuing his doctorate at the University of Maryland. The notion that having a close relationship to the natural world was sacred and profound left a powerful imprint on his worldview. It is in the conclusion to “Walden,” you will find his favorite quote, “Rather than love, than money, than fame, give me truth.”

While Thoreau relished retreating from the world to write his transcendentalist masterpiece, and Melville sequestered himself to a farm in rural Massachusetts, Terwin very quickly came to the realization that the company of others was vital for his own well being. He continued to research while pursuing his doctorate, studying the blue crab population in the Chesapeake Bay - ask him anything about any animal and he will practically burst in excitement over regaling you with factoids - but it was his time as a teaching assistant that proved pivotal in helping him understand he preferred working with students over being isolated in a lab.

In 2002, with his colleagues at the University of Connecticut, Terwin published “Linking climate change and biological invasions: Ocean warming facilitates nonindigenous species invasions” in the Proceedings of the National Academy of Sciences of the United States of America, a peer- reviewed multidisciplinary scientific journal. Since its publishing, his research has been cited more than 15,000 times.

The value of hard work has also been a driving force in his life, not just for the financial independence it represents but also the opportunity for personal growth by opening himself up to meeting people from all walks of life he wouldn’t have otherwise. He played basketball, tennis, and football during high school while also working part- time. As an undergrad at Michigan State, Terwin was named Spartan of the Year for his academic achievement and service, with a “resume sprinkled with a 3.9 GPA, and jobs as a two-year resident assistant in Wonders Hall, biology teaching assistant and night receptionist,” according to the State News campus newspaper. During his interview for the publication, Terwin said being an RA helped him learn a great deal about himself and although his position involved helping others, the residents often fostered his own personal growth. He also mentioned hoping to one day go to graduate school on the East Coast and eventually become a teacher.

Getting to know young people as unique individuals, helping them to grow into healthy, capable adults, is a dream career for a man who can still remember the special moments in his own education that changed him as a person. He first realized the power of student autonomy in a high school poetry class when asked to select and analyze song lyrics. For him, there could have been no more fitting an introduction to a new subject.

The valuable lessons in communication and the importance of student health and well-being he learned as a college RA, manifest today in his commitment to developing programs around positive psychology and building character.

When Terwin first came to Columbus to visit Wellington, he was struck by the vast potential synergy between cultivating confident young leaders and a city that felt vibrant and dynamic. “Everyone was really energized and there was so much potential with the power of student independent research,” Terwin remembers. “Wellington was a place open to big ideas and where passion really mattered for both students and teachers.”

As head of upper school, from 2012- 2019, he focused on giving students the resources they needed to create their own educational narrative, including providing them greater access to authentic independent research in college laboratories and local nonprofit organizations. The ability to fully explore a topic of personal interest in a real world professional environment has been a gamechanger for the school.

Elevating the morning meeting to include more student voice and recognition was another far-reaching initiative he led. “If we ask students to take risks,” Terwin explains, “they have to feel like they are a part of a community and they care about each other.”

He also set out to refresh and redesign the upper school science curriculum by creating a fully integrated program with independent science research. Experiential equity, in which all Wellington students have equal access to international travel to further their global studies, was an ambitious dream brought to life only through his dogged determination to make it a reality.

When considering what he has been most proud of during his time as head of upper school, Terwin returns to what brought him to teaching in the first place. “I was really able to get to know every student. I was present and connected with the students.” Indeed, in a gesture of great personal significance, he once wrote long notes to each graduating senior, specific to them as individuals. It meant a lot to him to be able to show the class how much he cared by being fully present and available to them.

Present and available are perhaps the two best words to describe a head of school excited by the infinite possibilities from making meaningful connections. Whether fostering mentorship across grade levels or providing students access to industry leaders in Columbus, Terwin looks forward to creating a more diverse, active, and influential school community.

“As the requirements of higher education and the priorities of the workforce change,” he wrote to parents at the opening of the school year, “it is critical that we remain open and agile, balancing the foundational content and skill areas, while also facilitating passion driven deep dives and unique educational experiences for our students, from Little Jags to seniors.”

With record-high enrollment during his first year as head of school, Wellington will most definitely benefit from his expertise. As a marine biologist, he knows a thing or two about the conditions necessary for a thriving ecosystem.

Always out and about on campus, happy to chat about whatever is on your mind, he enjoys sharing a joke but will also, unfailingly, ask about your day, a recent trip, or your family. If you ask the same of him, there is a palpable delight in the way in which he talks about his wife, Mia, and children, Hannah, Cooper, and Finn. He is quick to give Mia all the credit in the world for making him better in every way. And the pride he has for all his children have accomplished in their young lives - Hannah recently graduated from Loyola - Chicago, Cooper is a senior at Miami University, and Finn is a senior in high school - is matched only by his steadfast love and support for the varied paths they have and will continue to take through life. As a parent and an educator, he can fully attest to the fact that no two children are alike. The real joy in life is discovering who they are as people and feeling honored to guide them on that journey.