A Dominating Season for Boys Soccer

A Dominating Season for Boys Soccer 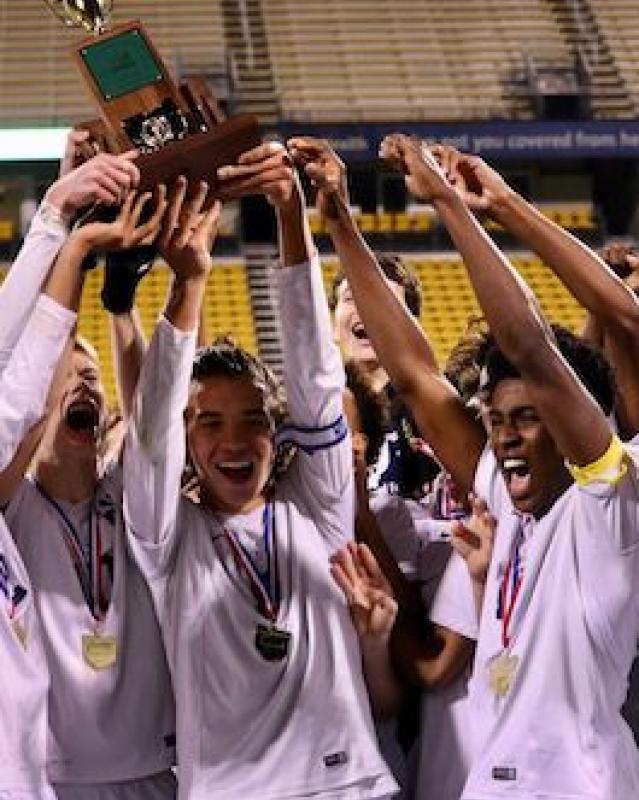 Boys varsity soccer made history this year by becoming the first soccer team in Wellington history to secure the title of state champions. Under the leadership of head coach J.J. Bain ’06, assisted by Aaron Clayton and Maziya Chete, the boys boasted an impressive 18- 2-3 regular season record, as well as scoring 40 unanswered goals during the postseason, showing their dominance and making a statement as a major Division III powerhouse.

These statistics in mind, their state championship run may seem like a walk in the park, but what these numbers do not show is all of the hard work and dedication that has been fostered by a team culture unlike any other.

After a crushing 7-2 defeat to rival school Grandview Heights ended their promising tournament run during the 2018-19 postseason, the team was more motivated than ever to improve during the break and get back to winning ways. Though they went into this season being heavily favored to make a deep tournament run, their path to success was anything but straightforward. Coming off of a disappointing yet successful season the year before, the Jags suffered heavy losses, having graduated eleven seniors, including captains Katz Kadlic ’19 and John Riley O’Toole ’19.

Driven by the loss of these key assets and mentors, the team pushed themselves throughout the preseason and entered the new year with high aspirations. Led by returning captain Eli Dulle ’20, as well as first year captains Freddie Lin ’20 and Nick Robinson ’20, the Jags got off to a good start to the season, securing early victories against Bloom Carroll and Buckeye Valley, and tying a good Division I side in St. John’s Jesuit. The team yet again showed its quality and character, losing narrowly to a strong Hilliard Davidson side 5-4. These performances within their division, and surprise results against teams from higher divisions, saw the Jags climb the state rankings.

Important results against rivals Columbus Academy and Worthington Christian helped the boys cement their position as serious contenders for the state championship, and a 2-0 win over Bexley secured the team a first-place tie in their league. The Jags also got their revenge from the year before, taking down Grandview Heights 1-0 at Robert’s Field.

Going into the tournament, the team was expected to make a deep run. However, the Jags blew their opponents out of the water, exceeding all previous expectations. An electric offense, featuring captain Freddie Lin ’20, who had 31 goals and 13 assists on the season, ran rampant during each and every game. Combined with a rock-solid defense, led by captain Nick Robinson ’20, and a midfield that adapted to every situation, the Jags shut out all of their postseason opponents, producing an astounding 40-0 goals scored to goals conceded ratio. The team showed total dominance, even in the state championship game. The opposing Bluffton High School Pirates were no match for the boys soccer team, who put up four goals in front of a huge crowd at MAPFRE Stadium, including a hat trick from Ahmet Ozer ’20 in the first half.

Senior Adenola Atekoja credits their success to the unique team culture, saying “it started with the guys before us who built the foundation for this team. This is one of the best groups I’ve ever been with, and I’ll miss every single one of them. I’ve never been a part of a team with vibes like this one. J.J. really helped to get that to us, telling us that in our journey to states we could never ‘tread water while trying to swim the English Channel,’ which means that we could not stop pushing ourselves at any point during the season. Now look at us, it worked.”

Unfortunately, the team loses eleven seniors yet again including captains Eli Dulle, Freddie Lin, and Nick Robinson. Also graduating are Adenola Atekoja, Noah Jones-Beyene, William Reid, Zeke Lloyd, Julian Shuttleworth, Zakaria Ahmed, Ahmet Ozer, and Vince Hall, all of whom played a huge part in the success of the program over the years. They have all contributed to shaping the defining culture of the team, and will forever be remembered as the first state champions in Wellington soccer history.

Despite these losses, Jags will look to defend their title next year, this time under the leadership of three new captains: Eoin Basobas O’Carroll ’21, Jordan Livits ’21, and Henry Lin ’22. Some might say that with so many graduating seniors the Jags will be underdogs next year, but based on the success the program has experienced under Coach Bain, there is every reason to doubt this talk. Anyway, even if they are not the favorites to win, there is no reason to count out this group. Besides, who doesn’t like an underdog?