This story originally appeared in the fall 2017 issue of The Jag magazine. 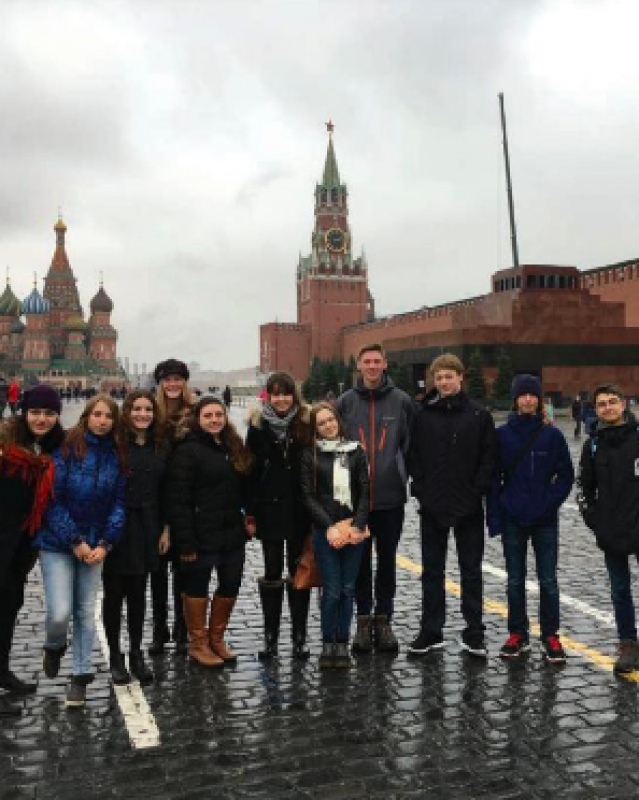 Students got to know each other beyond news headlines and soundbites, allowing for a free exchange of inspired entrepreneurship.

Collaboration can only be successful when the parties involved share commonalities of purpose and discourse. Without mutual objectives and clear, open communication, projects often fail before they can ever come to fruition, crumbling under the weight of conflicting personalities and ambitions even in the best of conditions. Imagine trying to work with a group of peers from whom you are separated by a large distance (roughly 5,000 miles), several time zones, and language. Factor in early morning meetings and cultural dissimilarities, and a joint effort with so many seemingly incongruous aspects would surely prognosticate disaster.

But what if you didn’t know the odds were stacked against you? What if everything you had been taught led you to accept the opportunity of a lifetime because your interest in the world and the people within it transcended any potential perceived barriers?

In the fall of 2016, Wellington upper schoolers were up for just that type of challenge when they spoke with students in Moscow and Surgut, Russia with the expressed purpose of entering into a business collaborative. The program, a joint venture with the Columbus International Program (CIP), Junior Achievement of Central Ohio, Inc., the Lingua school in Russia, and Wellington, was funded through a grant from the U.S. Embassy in Moscow as a peer- to-peer initiative intended to promote better relations between Americans and Russians. Projects were required to be apolitical, and students were encouraged to concentrate on shared interests as they worked together on a business venture, while learning about international relations, trade, and the benefits of cross- cultural awareness and respect.

During regularly scheduled Skype sessions (before school for Wellington students and in the early evening for the Russians) participants got to know each other beyond news headlines and soundbites, allowing for a free exchange of inspired entrepreneurship. “Early on we realized that communication was key,” Maithri Kora ‘18 said, “especially when we couldn’t meet in person.”

The whole experience required a tremendous amount of dedication from students, including long hours of personal time allocated for research, making contacts, and drafting business proposals, as the two groups worked together designing and eventually running their own businesses.

ICE (Innovation, Creativity, Entrepreneurship) Scholars from The Ohio State University Fisher College of Business provided mentorship advice as students divided into groups related to management and leadership, finance, supply chain, marketing, and sales. While language never seemed to be a hindrance to the free exchange of ideas (Lingua is the largest private international language school in Surgut, so the Russian students

were impressively fluent in English), other differences did arise. When the groups first began to narrow down their potential business plans, and the idea of developing an app came up, some of the concepts offered by the Russian students were already commonly used in the United States. The students’ excitement for the project, however, could not be deterred.

“We decided to build an innovative platform to help students and young adults in both the United States and Russia find jobs,” Kora said. “Essentially, we built a job-finding app, and both platforms will provide different job opportunities, including full-time, part- time, and paid internships, for high schoolers and college students. We named our company Intervyu, and the Russians named theirs Work and Grow.”

The pinnacle of collaboration came through the travel opportunity it presented. After members of the Russian group visited Columbus in January, Wellington student leaders travelled to Russia in March to continue their collaboration on the job app. First arriving in Moscow, the group, accompanied by upper school teachers Sara Brdar P ‘02 ‘03 and Curt Hansen P ‘12 ‘15, visited Red Square and other iconic historical monuments, many of them tributes to World War II and the
role the Soviets played in defeating the Nazis; the impact of that devastating conflict still very much in the present day for the Russian people. For students and teachers of history, the trip provided many profound moments of actualization beyond textbooks and research papers. Getting to know their peer counterparts and host families was particularly revealing as the similarities between the two countries quickly became apparent despite what was often portrayed on the nightly news.

For Wellington student Alfonso Botta- Lopez ‘19, who taught himself Russian before joining the IBC, the best part of the trip was meeting the people. “Historically, political tensions have been high between our countries,” he said of the experience. “It was very cool to see a country portrayed as so different from us actually be so similar. In spite of everything, the teenagers in Russia are still just teenagers.”

Audrey Unverferth ‘18 had a comparable impression. “I loved spending time with the Russian students. They were very interested in American culture. We got to know each other really well. I was sad to say goodbye. I hope to see them again soon.”

One connection Russians share with American pop culture is a respect for entrepreneurship, as capitalism is gaining traction the former U.S.S.R. The energy level and newfound vibrancy was apparent to Hansen, who had visited a Russia still reeling from the effects communism decades ago. Indeed, Wellington students enjoyed a bit of celebrity treatment as they were followed by local news crews and often interviewed about their thoughts on Russia. Botta-Lopez was a guest on a morning show in Surgut and the other students were featured on more than one discussion panel. They were also on a Russian version of Shark Tank where they pitched their business idea to professional investors.

Both Brdar and Hansen were impressed with the leadership skills displayed by upper schoolers on the trip. They were excited to see students who had previously demonstrated high achievement in academics also really take command of an entirely new experience far from home as they presented, were interviewed, and interacted socially with Russians of all ages in a variety of scenarios.

Upon returning from Russia, students were eager to get to work developing their Intervyu app and began promoting a crowdfunding campaign to raise startup money. While tentative plans included beta completion by the end of the school year, many members of the IBC continued their efforts over the summer to ensure the project would be completed. Their passion and dedication toward finishing what they began is commendable as well as globally significant. In a world in which relations between countries and their leaders can swing dramatically from day to day, the climate for cooperative commerce will always be inviting for those who can clearly see the humanity behind the capital.