One for the Books

One for the Books

This story originally appeared in the fall 2017 issue of The Jag magazine. 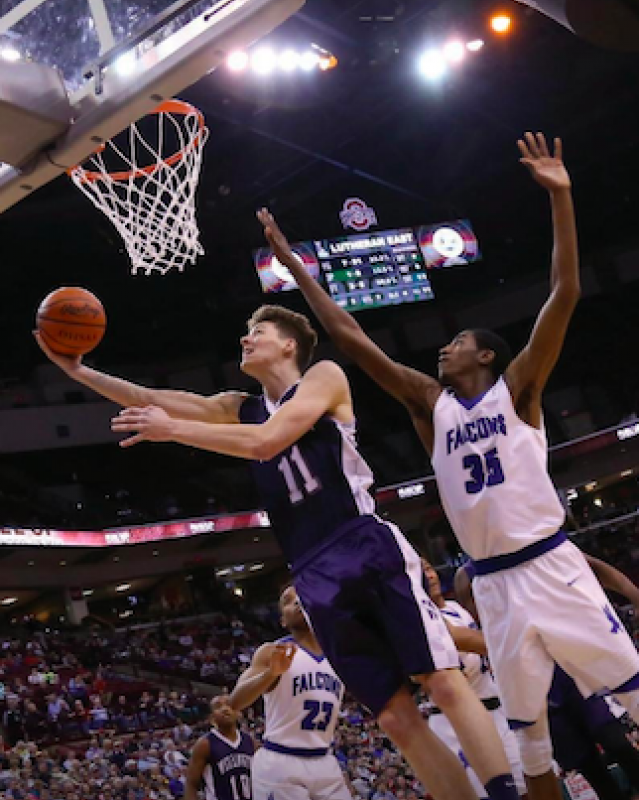 The boys varsity basketball team made school history when they reached the 2017 State Championship final. Having made it to the final four the previous year was impressive in its own right as an illustrious first time achievement in the annals of Wellington Boys Basketball history. The sense of excitement for a team that had worked incredibly hard, overcame numerous obstacles, and just began finding their stride in early March was contagious. With each post season victory, the Jags were mounting support from the Wellington community and from newfound fans all across Central Ohio.

“The accomplishment of making back to back Final Four appearances and earning the title of State Runner-Up is nothing short of remarkable,” Athletic Director Lindsey Smith P ‘26 said.

“Even more impressive though, is what this accomplishment did for our community. It inspired other student athletes that may have felt doubt in their own ability. It showed that hard work reaps reward, in sport and in life.”

In three short years, Head Coach Artie Taylor, his committed staff of assistant coaches, and a group of dedicated young players transformed the team into an elite force driven to succeed. Known for pushing athletes to work their hardest while also showing how much he truly cares about the boys, Coach Taylor always kept the team’s focus on the big picture. “What we did was truly remarkable,” he said. “This journey was a testament to what is possible when you work together for a common purpose. Our players knew what they wanted to accomplish every day and I think their belief and confidence along the way made it happen. “

The team had an impressive regular season against some of the top teams in the Central District. The Jags entered the post season with a record of 15 wins and 7 losses. During the first two rounds of the tournament the Jags cruised past Tree of Life and East Knox on their home court. Things began to heat up against Cardington Lincoln in the District Semifinals, but “we had one of the best defensive performances I have ever seen that had us up by 32 points against a highly explosive offensive team,” Taylor said. “It was just a great testament to our guys showing the ability to lock in and execute our game plan to its fullest. The greatest thing was everyone contributed at a high level.”

The state tournament semifinal game against Lima Perry provided another Wellington showcase of talent when Dustin Harder ‘17 tied a Division IV semifinal record with 21 rebounds and Solomon Pierre-Louis ‘18 scored 16 points in their 68-47 victory against the Commodores. While the team was unable to defeat Cleveland Heights Lutheran East in the state championship, Harder was named Outstanding Player on The Associated Press Division IV All-Tournament team for his 23 points and 32 rebounds in two games and The Jags walked away with the State Runner-Up title.

Although the boys fell just short of their ultimate goal of winning a state championship, the legacy they left behind will be remembered for years to come. “Playing for a championship was special because it had never been done before in school history,” Bob Faller ‘18 said. “We knew that this game was bigger than just our team. It was for all the Wellington basketball teams that came before us and those that will come after. That’s pretty great.”