This story originally appeared in the fall 2015 issue of The Jag magazine. 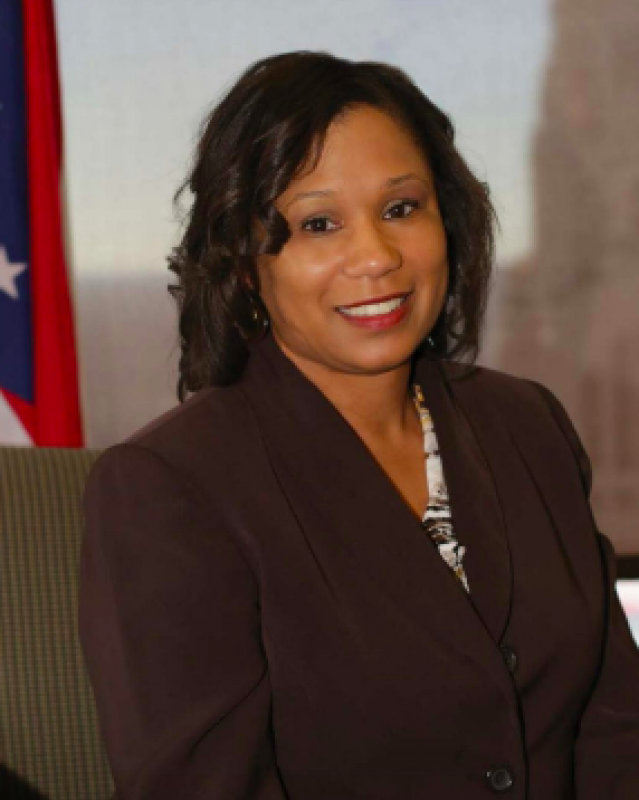 When Cynthia Callender Dungey ’89 was called to the Lincoln Room at the Ohio Statehouse in the middle of her work day, she was uncharacteristically at a loss for words.

Fortunately, upon finding Governor John Kasich waiting for her, Dungey also foundher voice and was able to engage in a deeply philosophical dialogue with the governor about the best way to help Ohioans in need of assistance find jobs and prosperity. By the end of the conversation, the accomplished lawyer and Chief of Staff of the Ohio Department of Medicaid was asked by Kasich to take on a new role as Director of the Ohio Department of Job and Family Services.

“In leadership, I believe you have to be ready to serve,” Dungey said one bright afternoon this fall in her office overlooking Downtown Columbus and high above the statehouse in which she first found herself entrusted with the oversight of 3,000 employees and the lives of 1.7 million Ohioans receiving aid. “I always wanted to be a social worker and save the world. If you want change, you can’t stay on the sidelines.”

Dungey is as inspiring to meet as she is warm and personable. Always smiling and quick with a joke, she speaks directly but in an inviting manner that draws in everyone around her. She is thoughtful and measured but never reserved. Her passion for helping people is palpable and one can’t help but tear up at the poignant stories she tells of those in need. One such story involved an internship Dungey had at Children’s Hospital during her senior year of high school at Wellington. She worked in the Family Abuse Unit of the hospital and co-authored a published article about pediatric hand injuries often indicating child abuse. After making the connection that abusive parents would often attempt to correct a behavior by harming a child’s hand, such as forcing a child’s hand on a hot stove as punishment for touching it, Dungey realized not all families were healthy and happy like her own.

“There are times when I’m driven to tears by the work I do,” she said, “but I always remember that I have the opportunity to change lives.”

Dungey’s own life was forever changed when she first visited Wellington’s campus as a high school sophomore from the near east side of Columbus. She can still vividly recall walking through the
halls and seeing the science and computer labs, feeling immediately that the learning potential in such an environment would be limitless. When she enrolled the following year, Dungey found herself struggling not only with a challenging curriculum but also with the fact that, for the first time in her life, her classmates did not look like her.

“It caused her to wonder about her identity,” former Wellington English teacher and college counselor Chris Williamson said. “Cynthia had to fit into two very disparate worlds. She told me she would change out of her uniform on her way home on the COTA bus to avoid being different at home, even as she was dealing with being different at her new school. She described Wellington, not in a disparaging way but genuinely, as La La Land for her, and for her neighbors, yet for her this unreal ideal school became part of her reality. She was determined to make it work.”

Along with confronting a sense of “otherness,” Dungey faced another fear that could have crushed her. The fear of failure. She realized that despite being an honors student at her previous school, the course work at Wellington was far more advanced than she had been accustomed.

“For the first time, I had to face the possibility that I wasn’t going to be at the top,” she said. “It was important for me to take personal responsibility and do what I needed to do to be successful.”

Dungey quickly set to work, teaching herself 10th grade curriculum at night while also keeping up with her current 11th grade classes. While she did indeed do what she needed to be successful at a new school surrounded by new people, Dungey will always feel indebted to the faculty members and fellow students who embraced her and encouraged her every step toward achieving her goals. The individual attention she received from her teachers, including the creation of a Spanish class solely for Dungey, allowed her to ultimately excel academically far beyond what she could have ever imagined.

She also began to think differently about the world and her place within it. Teachers like Sam Stewart inspired her to ask difficult questions and have the personal drive to find answers. When it was time to consider colleges, Williamson guided Dungey through the daunting selection process.

“I remember Mr. Williamson spending a lot of time with me,” Dungey said, “telling me that I shouldn’t rule schools out simply because of cost or whether they were close to home. He opened up all my options.”

She went on to earn a Bachelor of Arts in political science and sociology from DePauw University and then a juris doctorate from the Ohio Northern University College of Law. Fresh out of law school, Dungey’s dedication to public service led her to the attorney general’s office where she worked in healthcare fraud. In all of her roles throughout her career, she has found preparation and collaboration to be imperative. “I don’t think I have to be the expert,” she said.

Humility aside, Dungey is an expert on the topic of Emerson, her 4-year old son. Board books and Legos are in ready supply in her office as he is always welcome to visit, and Dungey, often required to work long hours, tries to make the most of their time together. Never missing any of Emerson’s activities is important to her, as is making treats for his class, explained this self-proclaimed Pinterest queen. “As a parent, I try to give him every opportunity to learn. I allow him to explore.”

Married to husband Richard, Dungey truly feels she wouldn’t be able to succeed without his support. She also looks to hobbies and interests like reading, traveling, and photography to help unwind from the pressures of her job. Dungey holds close to her heart the words of former Ohio Attorney General Betty Montgomery, a mentor and close friend, to make sure that she always takes care of herself.

Now, as Dungey continues to strive toward her professional goals of bringing stability to families and creating pathways for them to succeed, she is reflective of the impact Wellington had on her. During her acceptance speech as the first recipient of the Distinguished Alumni Award in September, Dungey expressed her gratitude for her alma mater. “I would like to thank Wellington. For if it was not for you, your vision, and the open arms I received, I’m not so sure I’d be where I am today. The path I am on today...you were my bridge, my village, and you continue to be that for me today. And as I carry on the torch, know that you live with me every single day in my heart.”