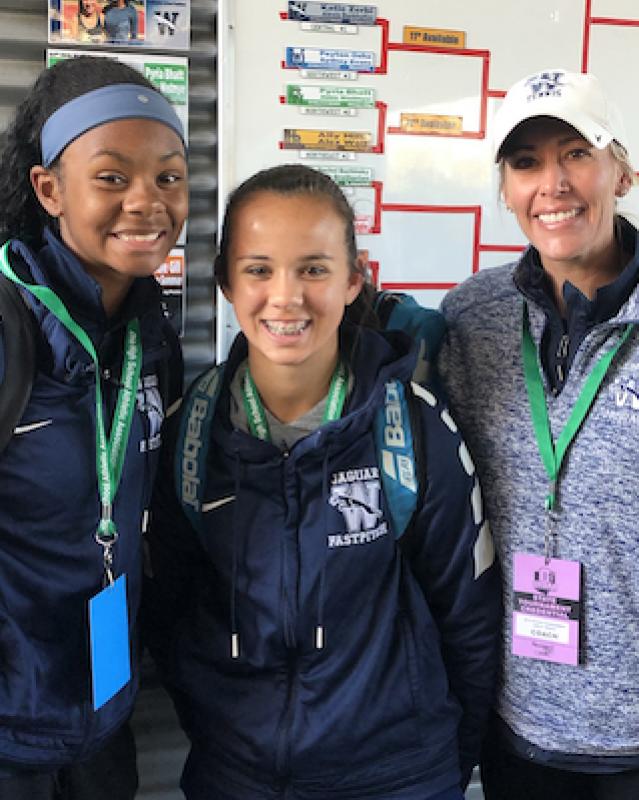 At the heart of every great sports team is great leadership, and no relationship more important than between coach and player. Unique in its complexity and influence, the bond between the two can resemble teacher and student, parent and child, friendship, and fan club at any given moment, or even sometimes all at once. For the Wellington alumni coaches, Rebecca Spears Hinze ’96, Craig Mosier ’01, and J.J. Bain ’06, the opportunity to forge that deeply impactful bond with a new generation of Jags was a calling they couldn’t leave unanswered.

All three made Wellington history by taking their teams to state championships this fall. Hinze coached the girls tennis doubles partners Katie Zerbi ’23 and Alexis Burkhalter ’22 to a 4th place victory. Mosier coached boys varsity golf to a state runner-up title and Aidan Schumer ’20 to the state individual title. Bain coached the boys varsity soccer team to a state title. Before they could lead their teams to success on the state level, Hinze, Mosier, and Bain were Wellington student athletes themselves.

Hinze played varsity tennis for four years, learning, what she recalls, valuable lessons in time management and to have clear goals. “There were times that tennis took precedence over other events,” she remembers, “but having a purpose kept me on a focused path. Specifically at Wellington, being on a team with a variety of players taught me why I loved tennis, and took out a sense
of competition among friends. We all wanted different things out of our time on the court, but we also wanted to play as a team and represent our school.”

One of Hinze’s favorite memories was having the entire team leave school to watch her play in states. She felt a similar sense of pride when, years later, the girls tennis team she was coaching impressed her with their mutual support for each other, even though as individuals they could be quite different. She recalls their success being the result of wanting to build each other up and come together as one amazing team.

For Mosier, playing four years of golf and tennis at Wellington paved the way for a college athletic career in which he played in two NCAA DIII Championships with the Denison University Golf team. Mosier believes if he hadn’t started playing sports at Wellington, he would have never become a coach. “This has been my biggest opportunity to give back to the Wellington community,” he said. “To help players learn discipline, and grow in their athletics, but also applying that discipline to their schoolwork and other passions.”

Watching the team grow together as they followed up their best season in school history and led by two seniors, Aidan Schumer and Garret Thesing, who had developed impressively over the last four years, made Mosier tremendously proud. Coaching Schumer to be Wellington’s first
ever individual state champion was another career highlight.

Bain believes that what makes a winning team, aside from lots of hard work, is a group of players who have a strong sense of their role and responsibility to each other at any given moment on the field. As a former Division I soccer player for Cornell University and later for the United Soccer League’s River Plate Puerto Rico, he has keen insight into what team sports have to offer young athletes, including a better understanding of group dynamics and how to best maximize collective power.

When he first started coaching, Bain wanted to cultivate in his team the same joy and wonder he felt
as a player. In recent years, he has become more intentional about trying to develop student athletes who can problem solve and also adapt to any situation. “Ultimately most of the players I coach won’t even play soccer in college,” Bain says, “but I do want them to have the confidence to take on challenges, and know how to be a reliable and positive member of a team, community, or group.”

During his own time as a Wellington student, playing soccer and basketball all four years of upper school, Bain developed disciplined routines and habits that served to build self- confidence and belief in himself. “Being a student athlete also gave me the opportunity to develop friendships with people I may not have gotten to know otherwise,” he says, “and therefore broaden my perspective.”

Commitment and effort are what bring success, Mosier believes, for any path a student athlete follows in life. Reflecting back on the 2011 State Championship golf team, he remembers several players had no interest in playing collegiate golf, but went on to become a physician, aeronautical engineer, and a software developer.

Hinze hopes the players she has coached will remain steadfast in their belief in themselves. She also wants them to understand that accomplishing their dreams is the manifestation of their hard work, and being a part of a successful team is a journey to cherish. “When an athlete looks at you, and they know they can do it, it’s magical to watch,” Hinze says.