This story originally appeared in the fall 2018 issue of The Jag magazine. 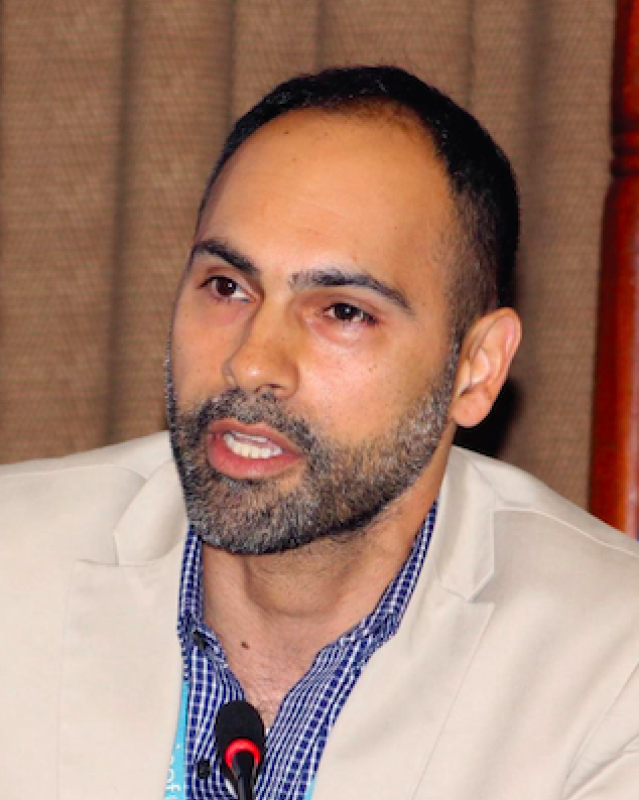 Each morning when Nahad Sadr-Azodi ‘92 drops his 4-year-old twins off at school, he says “Be” and they finish by saying “kind.” Those two simple words do not come without deep meaning for him.

As a regional immunization specialist, Sadr-Azodi helps 20 countries reach the most marginalized and disadvantaged children and communities with life- saving vaccines for UNICEF’s Middle East and North Africa region. He first came to Wellington as a teenager, just a couple of years after immigrating to the United States, and still feels grateful to our school community for welcoming him with open arms and giving him the gift of a truly remarkable education.

In his own words, Sadr-Azodi describes the incredible life journey he took, from starting over in a new country as a young boy to helping others reclaim their lives in the face of adversity.

A New Life
Wellington, and its compassionate teachers and ambitious yet supportive classmates and students, offered a very stable and embracing setting for me, perhaps for the first time at that point in my life. The school became a beacon of hope and stability; a place that I looked forward to and had a sense of belonging.

Those years gave me the space and an opportunity to ‘catch up’ a bit with life. I am still catching up, but the Wellington years and the forgiving teachers and inspiring classmates provided some sense of direction and a safe environment for an immature adolescent who was in a serious search for his identity.

I don’t think I would have passed any of my English or history courses in the first two years without Greg McGill ‘92 who kindly spent hours tutoring me.

Also thanks to the inclusive nature of Wellington, I could participate in team sports, even though I had no business or talent to do so. Steve Paull ‘92, David Tingley ‘92, and Brian Abbott ‘92, among many others, were so encouraging and willing to accommodate (or tolerate) my limited contributions. There are so many classmates that I am leaving out, but a special shout out to Annette Karonis ‘92 (may god rest her soul in peace), Dorina Yessios ‘92, Katerina Yessios ‘92, Cecily Breckenridge ‘92, Tanikka Price ‘92, Dannette Sharpley ‘92, Richard O’Shaughnessy ‘92, Emily Decker ‘92, Emily Hurst ‘92, Dinesh Gursahaney ‘92, Ryan Krasik ‘92, and Greg Olsen ‘92 who were so kind and inspiring and influenced and helped shape my life and career. I sometimes see them on social media and am so proud of their achievements and the great work they are doing.

Man of Mystery
I first became interested in microbiology as an undergrad in college. I originally wanted to study psychology, but after one sobering semester, I switched to microbiology since it was easier for me to absorb. Following undergrad, I initially thought of pursuing my studies in genetics
but then, rather accidently, I came across a degree in global health and epidemiology based in Atlanta. In 1996, there was a buzz around Atlanta as it was hosting the Olympics, so, I enrolled. Atlanta is a unique setting, especially for those interested in public health. It is self-proclaimed as the ‘public health capital’ of the world with the likes of the Centers for Disease Control and Prevention, Carter Center, Care, American Cancer Society, and other agencies headquartered there.

What makes epidemiology, which is the study of epidemics and distribution of diseases, but with broader implications and reach, very interesting is its inherent investigative nature – kind of like a Sherlock Holmes story. So, those current Wellington students who enjoy details and solving problems should check it out.

Global Perspective
Upon finishing graduate school, based on the advice of my mentor, I packed up and travelled to the field. I started working in some interesting areas of public health and development such as faith and health in India; microfinance, poverty alleviation, and HIV/AIDS in South Africa; tuberculosis education and youth psychosocial activities in Kosovo; and refugee health in Eritrea. I also had a stint coordinating an oral hygiene program in the inter city schools in Chicago. The common denominator among them was that I often resorted to my analytical and investigative training from graduate school to identify the cause and effect.

After a few years in the field, however, I realized that much of the change (for the good) we are seeking comes down to people and the systems or environments in which they live, work, and play. So I returned to the States and went back to graduate school in Chicago for a degree in management and organizational behavior and learning. Understanding people, their motives, and behaviors is critical to sustainable change. These days I have developed a passion for economics because I have learned that identifying the problems (epidemiology) and doing something about them (management) requires making choices, especially in terms of resource allocation (economics).

I was motivated to study and work in public health because I think everyone would agree that our individual health and well-being is one of the, if not the, most important drivers in our lives. Also I am sure most people recognize that our individual health is affected by the health of our families, communities, and national policies. My interest also stems from the fact that this discipline offers straightforward and often common sense tools and solutions for maintaining or protecting our collective well-being. Not to mention that global health training is a good way to start travelling and exploring other cultures.

Landing that Dream Job
I joined UNICEF in 2013 after a few years of working with the local government and non-government agencies, World Health Organization, and the Centers for Disease Control and Prevention. UNICEF was always my dream job. It probably had to do with growing up in Iran until 1985 and spending my formative years waking up in the middle of the nights at the sound of sirens and seeking nearby shelters where, after a silent cacophony, bombs would start dropping throughout our town and homes. This experience probably planted the seed in me for wanting to help other children hopefully avoid or at least cope with these traumas. I am so heartbroken
for what has happened to the children of Syria. We have lost a generation of future Steve Jobs in that country.

In 1996 when I pursued my studies in global health, I learned about one of the humanitarian giants of the time - Jim Grant, former executive director at UNICEF. He was a brilliant person and a consummate leader. His involvement in child survival from 1980 to 1995 (when he passed) led to the transformational uptake of basic health services, including immunization, and has saved literally millions of lives. He often repeated that “morality must march with capacity” and he found it shameful that children and mothers were dying from preventable causes despite the availability of cheap and accessible technologies. I highly recommend his biography “Jim Grant: UNICEF visionary” for those interested.

Protecting the World
Immunization is one of the most successful and cost-effective health interventions available to human kind. A recent study from Johns Hopkins University shows that for every dollar we invest in immunization, we get a return of $16. Can you imagine this level of return on investment? In the ‘80s, millions of children around the world, including in the wealthy countries, were dying of pertussis, diphtheria, tetanus, measles, polio, and other diseases for which vaccines were available. However, the uptake of these vaccines was quite low and hence millions of children unnecessarily suffered or died. Today we can be protected against dozens of diseases for which we have vaccines. Healthy children, especially those protected by vaccines, can learn better in schools and have a better chance of becoming productive members of the society and contribute to their nation’s economic development and growth.

Inspiration
One of my mentors once said “if you want to do important work, work on important problems.” I think all Wellington alumni are doing important work in their own way. Waking up in the mornings and looking forward to going to work because we know we are working on important problems is the best part of the job. I am most inspired by people. Especially brilliant and humble people with conviction like Nelson Mandela, Jim Grant, and Bill Foege. I am always looking for mentors to help guide me and serve as a moral compass in my life.

A Father’s Dream
When my children grow a bit older, I would like to help them develop life philosophies rather than focusing on life goals and achievements. Personally, I haven’t had a five-year plan which has materialized, and this is mainly because we don’t know what the future will hold, what technologies will be in place, what opportunities will exist, and what the world will look like. So I hope my twins develop their own life philosophies and values so that they can be guided when faced with life decisions. I also hope my children will be open to making mistakes and not be so hard on themselves or be afraid to fail.

Finally, I hope they start travelling as soon as they can (on their own) and experience other cultures. It will be part of their human training versus academic. I think it gets harder to travel as we get older and start shouldering more serious responsibilities, so it is best to do most of our travelling and exploring when our todays and tomorrows are still more than our yesterdays.