This story originally appeared in the spring 2018 issue of The Jag magazine. 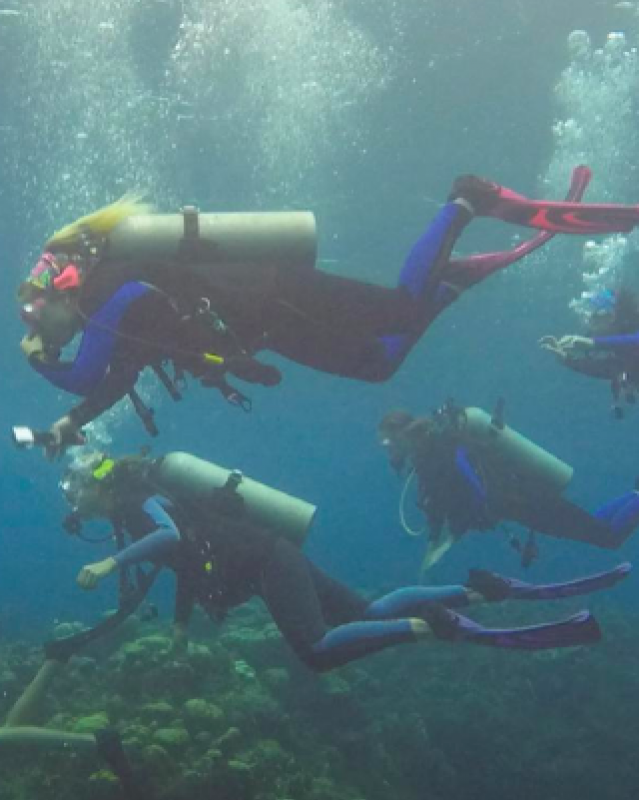 Waking up at 7 a.m., eating a quick breakfast, and heading right to class may not be every teenager’s ideal Saturday morning lineup, but for a group of Wellington students it was
a dream come true. Instead of uniforms and backpacks, they donned wetsuits and scuba gear to dive 60 feet under the Caribbean Sea, just off the coast of Grand Cayman. Class consisted of swimming with and observing the varied marine life they encountered, everything from sponges and coral to clams and fish. Students came face to face with eels, turtles, barracuda, and nurse sharks.

The trip to Cayman was the culmination of their marine biology coursework which also included SCUBA training and certification. Before heading on their deep sea adventure, students had the benefit of learning about the complexities of sea life from a teacher with a Ph.D. in marine biology, Assistant Head of School and Head of Upper School Dr. Jeff Terwin. The class covered topics related to coral reefs and mangroves and students participated in lab activities focused on animal diversity, including the study of living creatures such as brittle stars, banded shrimp, and anemones from marine environments.

Every organism was unique in its own way,” Kate True ‘19 said. “It was also amusing to
learn about all of their different parts and how every detail contributes to how the organism either attracts predators, fends off predators, or attracts mates.”

While some students had previous experience with diving, others had the added challenge of learning a completely new skill, one with potentially dire consequences if executed improperly. “The scuba gear is very, very heavy,” Isabella Vegas ‘19 said. “It weighed me down a lot. But once I was actually diving in the pool, it was amazing to be able to spend long periods of time underwater because of that equipment.” Vegas, who was not really afraid before beginning to dive, found mask clearing, the act of clearing water from your mask if there is a leak or it becomes too foggy, always made her nervous. Part of the training students received involved completely removing their masks 50 feet underwater, putting them back on, clearing the water out, and then continuing diving. “It was actually pretty difficult,” Vegas said.

Other students had to push through a deeper initial fear of diving. “I was very nervous and went alone for my first pool dive,” Abbey Marshall ‘18 said. “I couldn’t even go down to six feet. But the next week I came in with all of my friends and was able to dive to 12 feet, and eventually 60 feet on the trip. You just have to get past your fears that you cannot breathe because you can!”

Dr. Terwin was particularly impressed with Marshall’s ability to confront the challenges of a first time diver and ultimately have a rewarding experience on the trip. “It was remarkable to watch,” he said. “Easily descending to depths of 50 feet, Abbey was often one of the last divers back into the boat. On one of the dives, as she and her buddy were lingering at depth, we spotted a Hawksbill turtle. It swam right up to us, and we enjoyed a few glorious moments watching the very cute turtle move effortlessly through the water. That image was then contrasted during our visit later in the week to the Cayman Turtle Center, where the turtles were maintained in small concrete tanks. Abbey took on significant challenges, showed amazing resilience, and obtained an experience and understanding of the ocean that she could not have obtained by simply sitting in a classroom.”

Indeed some of the toughest lessons learned had nothing to do with the challenging curriculum, rather witnessing human brutality in the natural world. Prior to the trip, students participated in class debates related to the use of coastal resources, and researched topics related to conservation and captivity. It was this work, in particular, that would later inform their impression of the Cayman Turtle Center.

“The turtle farm was pretty sad,” True said. “The turtles were kept in small pools where they were so packed in they were practically on top of one another. In no instance do I believe that it is humane to keep a marine animal in a pool, when in the wild they would have the entire ocean to roam.”

At the turtle facility, students were confronted with a controversial issue related to the protection of the endangered green sea turtle, and the management and use of their current population when they saw firsthand how the turtles at the center were being treated.

“Turtles are migratory and solitary creatures,” Marshall said. “At the farm, they were kept in pentagon shaped concrete blocks with nothing but water. They had no vegetation of any kind. There were no sea turtles in the middle of the tanks. They were all away from each other and on the edges of the tanks, constantly trying to get out and listen to their natural instinct to follow the stars.”

Most moments in Cayman, though, brought into focus the exquisite beauty of marine biodiversity. Students were able to explore coral reefs in “no glove” dive sites, meaning divers were forbidden from wearing gloves to make them less inclined to touch the ocean life. These protected marine sites were far different from the coral reefs bleached of their natural color from increased water temperature and increased water acidity. “We learned about coral bleaching in class,” Vegas said. “I looked out for this on the reefs where we dove, but the good thing was that the coral colors were actually extremely beautiful and vibrant at our dive sites.”

For Dr. Terwin, the purpose of the class is to give students an understanding of the ocean environment and how it impacts their lives, even in Columbus. “I want students to appreciate the amazing diversity of habitats and creatures that live in the oceans, and that humans are having a significant impact on the marine environment. Wise use and conservation are critical components of our relationship with the ocean ecosystems.”

Every student in the class was affected by the experience. Whether it was rethinking a potential college major or the origin of a lifelong commitment to environmental advocacy, marine biology changed the way students viewed themselves as agents for change in the world. “The moments that happen on each trip when students come back from their first dives on the reef and, having observed the vast biodiversity, begin making connections between the organisms is always great,” Dr. Terwin said. “Even with stories and videos, there is just no way to replicate that level of understanding.”

Upon breaking the surface after one of her many dives in Grand Cayman, Christina Armeni ‘18 perhaps said it best when she shouted, “I love my school!”