Richard O'Shaughnessy: Opening a New Window on the Universe

Richard O'Shaughnessy: Opening a New Window on the Universe

This story originally appeared in the spring/summer 2016 issue of The Jag magazine. 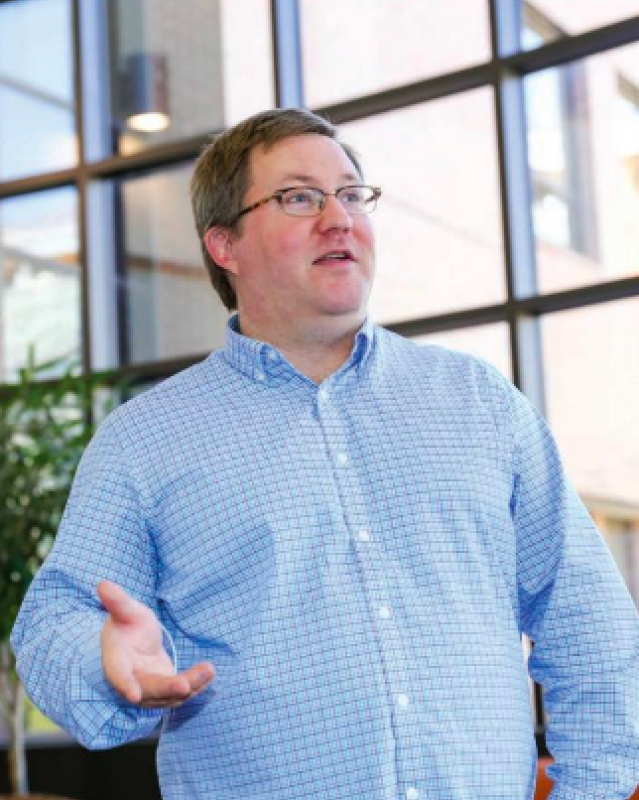 When asked if he would ever want to travel into space, astrophysicist and Wellington alumnus Richard O’Shaughnessy ’92 answered without hesitation, “No - space is very dangerous!”

He should know. There are few people living today more qualified to answer that question. With a B.A. in astronomy from Cornell University and a Ph.D. in physics from the California Institute of Technology, O’Shaughnessy is currently a math and astrophysics professor at the Rochester Institute of Technology. And that’s just his day job. He is also a researcher for LIGO (Laser Interferometer Gravitational-Wave Observatory), a large-scale physics experiment and observatory. For the last 15 years, O’Shaughnessy has been working with a group of top scientists detecting gravitational waves. As a graduate student, most of his thesis work was dedicated to designing the LIGO mirror, accounting for the slight temperature induced fluctuations in the equipment.

In February of 2016, O’Shaughnessy was finishing writing a grant proposal describing all the physics he and his LIGO colleagues could do after detecting binary black holes when he received an email that the discovery had, in fact, just been made. “I felt like I’d won the lottery,” he said.

The scientific historical moment in which O’Shaughnessy had been a part involved two binary black holes colliding and causing gravitational waves that confirmed Einstein’s theory of general relativity.

“We detected a new astrophysical source we had never seen before,” he said. “For most people who are not physicists, I think they find that the most cool. It’s not that we’ve proven Einstein is right; it’s that we’ve opened a new window on the universe. I think in the long run that’s why people will think it’s most important. Some have compared this moment to when Galileo first put his telescope in the sky. But I would say this is even more important. Imagine if the sky was completely invisible until Galileo put his telescope up to it. That’s basically where we are right now.”

The media attention surrounding the discovery must have felt like its own seismic shift in the universe as O’Shaughnessy’s work made the front page of The New York Times as well as television news coverage on every major network. In Columbus, O’Shaughnessy’s hometown, he was lauded as a local boy making good. Very good. In an interview with the Columbus Dispatch, he credited Wellington teacher and director of technology John Kruzan with changing his life by introducing him to physics in high school. O’Shaughnessy was quick to attribute his passion for pursuing knowledge to Wellington. “I had a lot of opportunities to create my own path,” he said. “I think that was one of the things I was really able to take advantage of most with the close community having a rapport with the people who were instructing and inspiring me.”

Wellington’s diverse curriculum had a tremendous influence on O’Shaughnessy. Classes like history with Sam Stewart and science with Carol Goldsmith thoroughly engaged him. “Wellington was the sort of environment that was conducive to learning how to be a self-directed person. The experience of independent pursuit of knowledge is something you want to make sure you have when you’re facing the challenges of your own life. There is no book for life. You have to figure out how to learn.”

O’Shaughnessy is excited by the potential practical applications of gravity wave detectors. In building LIGO, scientists invented technologies that had never been used before. “A lot of the pioneering work in quantum optics, cavity mechanics for doing high precision measurements, and controlling system, which will have spinoffs for quantum computation, will be a new, super cool way that computers can work in the future. We have wonderful, very prosaic, seismic isolation systems. If you want to build something that’s very precise, for example lots and lots of really big computer chips, you have to have very precise measurements and that means you have to keep things very still for a very long time. And now we’re very good at that. So there are a lot of spinoff technologies that we can certainly expect to happen from the sort of stuff we’ve developed.”

Since making waves in the world of science, no day is typical anymore for O’Shaughnessy. He continues to teach at RIT and his days are made even busier with teleconferences and emails with his LIGO colleagues. What’s next for this group? They are attempting to predict how often binary black holes should merge. This is what helped them prove Einstein’s theory in the first place; but whereas they previously had been “broadly” right, they now want to “pin down the details because there are some other things that could possibly be true,” according to O’Shaughnessy. “To do that we need to have more events and extract more information from each one. It’s a process of collecting more events; then, from those populations, infer robust statements about how each one of them could have been formed because each of them will be unique.”

Married to wife Tamara and the father of six-year old twins Richard and Gretchen, O’Shaughnessy relaxes by reading or hiking when he can find the time. He does his greatest thinking when he is pacing or walking and considers the best part of his job the continual process of discovery.

“I think it’s really cool to learn about the universe. It’s good to live in interesting times.”