Playing with Pride and Integrity Leads to State Championship

Playing with Pride and Integrity Leads to State Championship

This story originally appeared in the fall 2018 issue of The Jag Magazine. 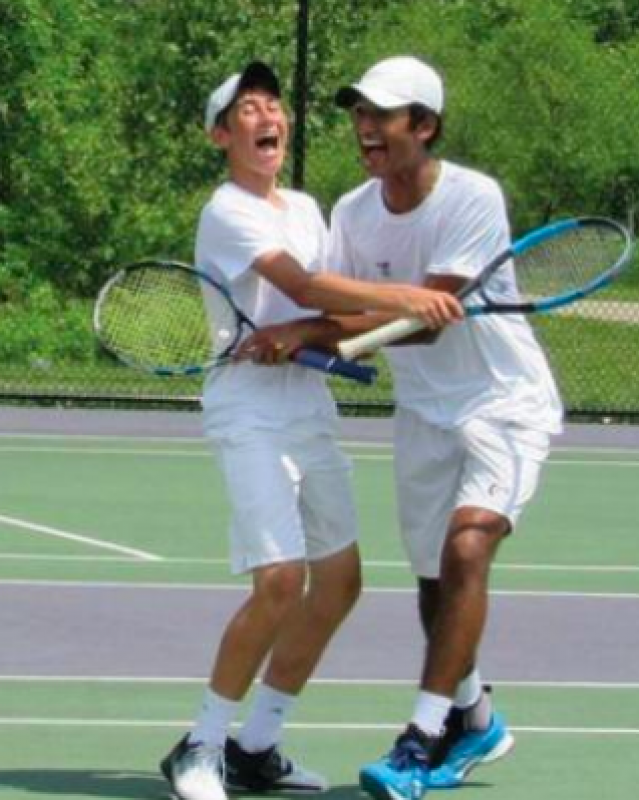 The boys tennis team rocked this past spring season by not only pulling off consecutive wins for Wellington, but by becoming the first tennis team in school history to secure a state championship.

Connor Biernat ‘18 described the incredible experience of winning the title against Indian Hill’s Maanas Pisati and Mack Ellis by explaining that Milan Gonela ‘20 had been ill for several days prior to individual states and while it forced him to withdraw from his singles match, he did not give up. The next day, he powered through with a 103 degree fever and played doubles with Biernat. They won, clinching the team title. This victory reflected the team’s core tenants of perseverance and accountability. Biernat and Gonela beat Indian Hill 7-5, 3-6, 6-1. Trevor Ball ‘20 and Adam Sorrels ‘19 won at second and third singles as well against Indian Hill. Another highlight of the season was the Biernat brothers, Connor and younger brother Griffin ‘21, winning the state doubles title.

Despite challenges, this group established themselves within Wellington’s history books as a team with intense focus and fight. Multiple setbacks didn’t deter the boys from recovering their swagger with decisive volleys and consistent returns. The team sealed match after match, silencing competitors. This experience solidified their already-tight bond as teammates and brothers.

The team was a powerful example of how to stay strong, rely on your teammates, and work hard to power through a tough moment. At the beginning of the season the team knew that they had the potential to go far due to their skill and several seasoned tournament players that would provide vital experience for big matches. Even though they were down a few players at the beginning of the season due to injury, USTA tennis tournaments, and other circumstances, everyone found a way to come together to overcome their obstacles.

“We worked hard and valued every member for what they brought to the team whether they played regularly or not,” Griffin said. “We rallied through injuries and family emergencies and it made us very close.”

The team put in the time, passion, and work to reach their goals. This was bolstered by amazing coaches, support from the athletics department, and the dedicated players.

Tom Haddow has been coaching the team since 2010. Over the past eight years, he has been able to see the growth and improvement in the varsity boys tennis team, making a name for the program in central Ohio.

What made this year the year that we became team state champions? “The Class of 2018 started it all as far as being a team contending for states,” Haddow explained. “Up until that point we had some really good players, such as Ian Wagner ‘11, but we never had the depth to compete on a team scale. Each of the following years since have produced excellent varsity players, and last year we had nine strong players who all played for each other.” The three varsity players in the class of 2018 were Connor Biernat, Ryan Young, and Kolapo Dairo.

Wellington Athletic Director Lindsey Smith P ‘26 ‘33 considers this team unique because they “created a culture where they consistently supported each other, while striving for individual and team success. They also created a growing sense of pride in their program and established their identity as the ‘WellyBoiz.’ They demonstrated confidence, poise, and dedication all season long. They are well deserving of the title State Champions.”

Their passion, drive, and hard work led them to the immense success that they achieved, but how much they cared for their program, community, and for each other is what made them stand out. “Everyone had the same goal from the very first day of practice,” Haddow said. “We had the best assistant coach in Dick Cassie and we had tremendous support from our athletic office and our trainer. I am so glad that the Class of 2018 and all the other kids will always have their state title as well as their memories of my favorite season.”

This team accomplished one of the best seasons in Wellington boys tennis history because they triumphed over any challenge, stuck together as a team, and played with the pride and poise of Jaguars.